The drive to my college takes about twenty minutes sans the traffic jams. This means Prasad Chettan and I have plenty of time to talk. And so, we have formed the habit of chatting and catching up on random things around us.

Yesterday, we got caught up in a somewhat annoying traffic jam. The situation got us discussing about the routes and diversions in and around Ernakulam. Suddenly, he asked me if I remembered the Pullepady house. The question came unexpectedly and it stirred some strange emotions in me.

Memories from my childhood came flooding back to me and I decided I would pen some of them down. 🙂

To start with, I recall the pullepady bus stop from where my brother and I used to board the school bus in the morning. Well, not really. we missed the bus on most occassions! But then missing the school bus was the best part! 🙂

I remember how I used to hope and pray that we would miss the school bus. That way Appa would have to take out the scooter – our own Bajaj Chetak! 😀 I always had the best view as my dad made space for me on the seat in front of him. My brother would sit behind us holding both our bags as we entailed in a mad pursuit of the school bus that was long gone.

There used to be this one small bridge (which I realize is near my current residence) that I considered to be the highlight of our little adventure trip everyday. I remember how I used to hold my breath as my dad raced the scooter up the little bridge and I would shriek as we went down the slope. It practically made my day if that part of the ride went well! 🙂

Next, I remember our lane which was called Kenson Colony. It was a small colony with about six or seven houses. There was no proper tarred road then and it was just mud. It was there that I first learnt to ride my tricycle. I had friends of my own age (three year olds) whom I would play games with. We would stay outside getting soiled till our parents came home from work and dragged us inside. 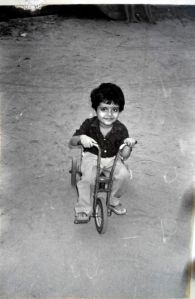 Then I recall the little by-lane that lead upto House No. 4. My home. 🙂

I always used to think of it as a bungalow of sorts. 🙂 (A three year old’s imagination!) It had a tiled roof with walls painted a dull saffron. Plus, we used to have a garden that had everything from shoe-flowers to drumsticks. 😀

It was a very small house – a truth I still find difficult to accept. It consisted of two halls (one being my dad’s office), a bedroom, a kitchen and a store room. Back then, that was heaven. 🙂

In the backyard, we had a washing stone and lines for drying clothes. Every Sunday, my mom made sure we had our ritualized oil bath. I have faint memories of how I used to stand up on the washing stone and shout out to my neighbour “Rani Aunty, njan kulikkan poka!” with absolutely no regard for my nudity. 😀

My most fond memories would be the numerous calls to Bake Bazaar. It was practically the only provision store in the locality that had a home delivery service and my brother and I made sure we were their best customers. Owing to the fact that both our parents were working, my mom had instructed the shopkeeper to dispatch home everything we demanded. Taking full advantage of this, we used to order every possible snack we could think of irrespective of whether we were hungry or not. Even now my mom reminds me of how I would fake ignorance of the contents of the bill that arrived in the evening. 😀

These are but very few memories of my childhood days at Kenson Colony. Despite everything we have today, I still miss those days at House No. 4. I miss being carefree and happy. I miss those days when my biggest worry would have been whether to order a Picnik or a Cheetos. 🙂

All being said and done, I miss House No. 4 that was my home. And I don’t think any other house will feel as special as it did. Maybe it is because I spent my childhood growing up there. Maybe because nothing can take away the special place that House No. 4 holds in my heart. 🙂

The average 24 year old who is striving to understand the larger things in life. The idea is to express and absorb new ideas and philosophies from around the world so that I can cherish life to the fullest. View all posts by Visakha

I am all ears! Cancel reply